At Hera, we're building the first community-powered calendar app for people to organize and protect their time.

Community building is top of mind for most founders nowadays and it has been for us since day one.

In this podcast series, I'll be talking to a few community builders to learn more about their journey and hopefully help others grow their own communities.

Mahyad is our first panelist. He is the co-founder and CEO of SigmaOS.

Enjoy reading the interview or listen to our original conversation.

Mahyad: I'm Mahyad, CEO and one of the founders of SigmaOS. What we do is we're building a browser that works the way you do.

We want you to feel organized and be organized while staying lacey. You don't have to be high maintenance, OCD, or uptight to be able to benefit from productivity.

💡 Trigger to build a community

❓ Louise: So tell us, how did you end up building a community?

Mahyad: Well, our inspiration came from Monzo. There's this UK bank that is very popular between younger people, millennials, and Gen Z, which is called Monzo and it felt really great. We build this connection with the bank, which is, that you don't normally build connections with your bank.

Because of their community, how they interacted with every user and they talked about it. What we realized is that we want to build a product very much for the people by the people.

And that's when we started in a little Slack community. Initially, it was like 5, 10 people and we just started growing that slowly but surely in the YC ethos of talking to your users all the time.

❓ Louise: For some startups having a community is potentially not the right move. How do you think early-stage startup founders should access whether this is a good move for them or not to kick off the community?

Mahyad: I think if you are a customer-facing, as in a D2C, which is essentially you are building for the average user, you always have to build a community nowadays.

It's the age of building openly, building with people, and it's also how you can leverage beating big tech companies.

Leveraging the fact of the masses and the power of scale where you talk to other people, you work with them, collaborate with them, and build this.

The way you assess it: the default is if you're building directly for customers and users, 100% go with the community. Whatever tool it is, don't overthink it. We use Slack because it was easy for us. Some people do Discord. There are tools out there.

Just make it very simple, make it very much easy for them to join to use to interact with you, that's the objective.

And then there are times where it's a bit more nuanced if you're building like kind of for business, but the end of the business is the users. So at that point, you have to think, am I talking to decision-makers? Or am I doing something we call bottoms up, – talking to individuals in the team, and then we grow?

If you are still interacting with individuals, the community is a great shout. There are a lot of blogs, Louise has written a bunch about it, how to build a community and how to identify it.

If you look at: I'm talking to people instead of corporations, always build a community.

It comes down to and I'm talking to corporations or people?

❓ Louise: And so once you decide this is the right move for you, how do you get these first people to join your community? You mentioned you had like 5 to 10 people at the beginning, how did you get them?

Mahyad: So initially, what we did was very much manual onboarding until it wasn't scalable.

❓ Louise: People in your community were people who are using SigmaOS, right?

Mahyad: Yes, so essentially we would reach out to people like Twitter, LinkedIn, and our friends' group, I'm building this product, do you want to try it?

And when we built it, we made it about them. Hey, do you have any feedback for us? Do you wanna ask for something specific? Do you have any problems? Essentially building this kind of customer service that you can directly at all times talk to.

We always had the intention of putting enough people where it just becomes an actual community or society where they help each other, they talk to each other. And what we did was initially onboard them manually and give them kind of a VIP experience and then go on to say, If you have any questions, here's our channel join it right now.

We wouldn't send the link afterward, we would literally sit there and watch them join the community and tell them kind of a bit pressuring them maybe but like making sure they join.

❓ Louise: It was really part of the onboarding right joining the Slack?

Mahyad: Yes. It was very ingrained in using SigmaOS. To get the people, we made this as part of the product. Essentially, if you are a SigmaOS user, you want to be a community member as well.

Mahyad: There are a few different things that we're doing. The main part is interesting enough for tips. They give each other tips at this point. We've built it in a format where they can talk. If someone has a question, Oh how do I do this? And we have so many times users replying before we do, let's say, Oh actually I do it this way, you should try it this way, which is great.

We have a channel called chitchat where we can talk about anything productivity-related.

It's all about them having this open forum where they can talk to us at any point.

And the second thing is we have something we call a QA spot. We've picked out 10, 20 top users, put them in the private channel and they always get the first access to our product. They test it, and they use it if there are any bugs before we do another release, which is great.

❓ Louise: The community right now is not open to people who are not using SigmaOS, right? It's closed?

Mahyad: Anyone can join it. It's an open Slack link, it's not like an invite or anything like that. That was actually in our website, Hey, look, if you're not sure jumping ship, join the community, see what's about, hear from other users that are actually using it, and then if you're interested, then download it.

❓ Louise: Would you recommend, now that you have a community set up, using any tool to manage this community? To measure the health, to re-engage with people, and are you using any tools for that yourself?

Mahyad: We make it very much like until it is humanly impossible. And again, Louise would know this as well, YC always says to do things that are not scalable.

We look at a lot of tools and it's shocking how there is no community management platform where you can actually just build communities and manage everything from there.

We looked for a long, long time and we ended up realizing this is a waste of time and just were doing in managing ourselves. We have a Head of Community person, who does an incredible job, and is always on top of things.

Mahyad: I think when the community hit about 100 people, we brought someone in. The community is now around 400 - 500 people. And it's still manageable.

When someone joins, he sends them a welcome message and sets up interviews with them, and talks to them.

So I don't think it's very necessary to have a tool early on until you're above 1000.

❓ Louise: What has been or is currently the hardest with regards to your community?

You have to differentiate between useful feedback and just someone not liking what you're offering.

For example, if you listen to every feedback you get, you're going build a Frankenstein monster of a product, right?

So you have to be very diligent: okay, this actually makes sense; this is not necessarily what we want to build; or some of these are old behaviors that we are actually trying to change.

That's the biggest thing because especially since there is a massive influx of information for you to be able to categorize and understand them and just really critically think about them. This is the other side of the coin where yes, you're getting a lot of inbound and building with users, talking to users, but it could be very overwhelming at times.

Louise: I completely agree with that point.

❓ Louise: I see so many people saying they fell in love with SigmaOS, I love SigmaOS on Twitter. People are already marketing on your behalf for SigmaOS. Do you have any secret sauce to share with us and with other community builders? How did you end up with that?

Mahyad: I always, and I think the entire team thinks this, there's anyone that tells you about a secret sauce, they're trying to scam you.

When you are very much caring about your community, your users, where when they send you feedback a lot of times when there's a bug and issue, when they send it up to us, we fix it in a couple of hours. Fix it, email them directly saying, Hey, we fixed this. This kind of builds this kind of relationship where they feel very much their input is being valued. They kind of take ownership of your product and feel like, Yes, I'm going to advocate for this person. I'm going to advocate for this product. I'm going to reach out to them or defend them at all times or market for them.

So it's very simple. Just build something that people want.

Louise: We can see that we've been through the same school, right?

Louise: Thank you so much, Mahyad!

I hope this interview was insightful for people thinking about kickstarting their community.

I'll be doing another one, a couple of weeks down the line. Sign up on Hera to stay tuned! 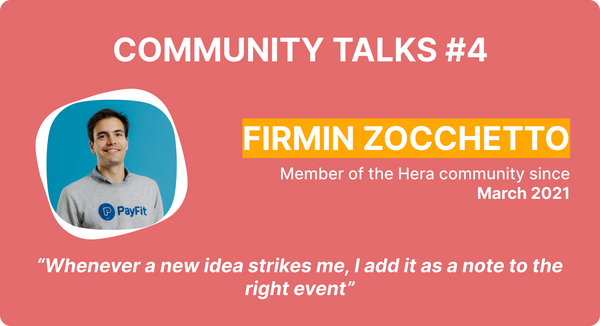 Firmin Zocchetto is Payfit founder, a French payroll and HR software. He is one of the very first users of Hera and he has opened more than 3500 events on Hera so far! What is Hera killer feature ?The notes scratchpad next to events! Every time I attend a meeting 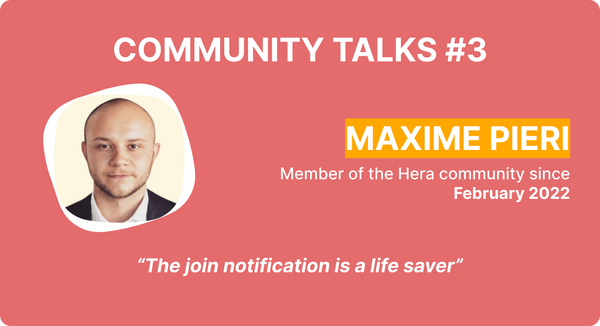 Who can talk better about Hera than our users themselves ? Check out in this community talks series how they use Hera and what they like in the community ! 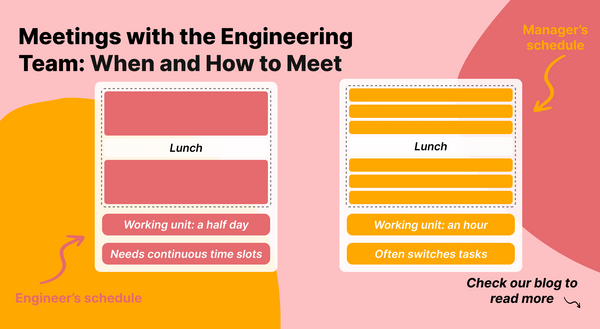 Are your engineers distracted by constant meetings? Here's how we make decisions about when to meet so deep work remains protected.